Skip to content
Our Social Mission
Loading...
Honor Gets Back On All Fours, While Rapid Application Group Continues To Help OthersShane Hacker2019-08-09T13:07:37-05:00

Honor, the facility dog, with her 3D printed prosthetic

Honor is a golden retriever who brings an incredible amount of joy to veterans and employees at the Medical Center in Muskogee, Oklahoma. The atmosphere of the hospital shifts as soon as she’s there. Her happy face and wagging tail greet everyone every day. Honor makes veterans feel whole again even though she herself suffers from a disability. Her loving soul gives light to those who feel trapped in darkness. Veterans have told Terri that there are days where Honor is the only reason they get out of bed. This 60 lb., furry presence gives relief to those who need it most.

Honor was born without toes on her back-right foot. Terri Woodruff, Honor’s owner, has been on the hunt for a prosthetic for Honor’s foot for months. It’s been a difficult process to find a prosthetic that fits correctly. The few prosthetics that Terri has tried have caused Honor severe pain from the prosthetics being too small in some areas and too big in others. The previous prosthetics not only hurt Honor’s foot, but hurt her hip and back as well. Terri was determined to find a prosthetic that would allow Honor to bring happiness for years to come. There are foundations all over the country that help raise money for acupuncture, specialized therapy, and prosthetics for animals with similar health issues. In July of 2018, the prayers of Honor’s handler, the veteran hospital, and Honor had been answered. A 3D printing company in Broken Arrow had heard of Honor’s struggle and wanted to help. Rapid Application Group was there to get Honor back on all four paws.

Honor, getting her prosthetic fitted at Rapid Application Group

Terry Hill, CEO and founder of Rapid Application Group, heard that there was a service animal bringing joy to veterans who needed help. Hill served in the army for 13 years as a Black Hawk medical evacuation aviator. Hill has a service dog named Jonsey. Coincidentally, Honor is Jonsey’s half-sister. “Seeing Honor in the wagon and the veterans, it gave me goosebumps because Honor is providing the same thing Jonsey is providing to me,” said Hill. Honor’s story hit close to home for Hill. After meeting Terri and Honor, Hill was more than happy to help create a new, readjusted prosthetic that would provide ease to Honor’s life.

Rapid Application Group is the only Service-Disabled Veteran-Owned Additive Manufacturing company in the United States. Because Hill is a veteran, he understands the benefits of having a service animal and vowed to do anything to help Honor live her life to her fullest potential. Hill did not have experience with printing a prosthetic for an animal, but where there’s a will, there’s a way! He did what any passionate person with a just cause would do; he started researching to find the best assistance on animal prosthetics. After days of searching, Hill found Brent Wilson on LinkedIn. Hill contacted Wilson and told him Honor’s story. As soon as Wilson became aware of the mission to help Honor, he wanted to do whatever possible to get Honor back on all four paws. Wilson runs his own non-profit located in North Carolina called LifeNabled. Because Wilson has experience with creating unique prosthetics, he was the perfect man for the job. Not only does LifeNabled enable mobility for patients, but also enables the development of technology so other prosthetists, mission groups and nonprofit organizations can serve patients all around the world. 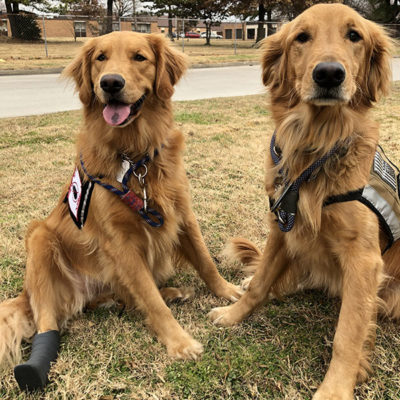 Honor and her brother, Jonsey

“We are so thankful for all the hard work Terry and RAG put in to help get Honor back in action! We are working with the last prototype now and it seems to be a pretty good fit! They put a lot of work and effort into doing this for us and we can’t thank them enough!  She’s back working 2-3 days a week, getting used to the new prosthetic and we hope to slowly build that up as she gets more accustomed to it. She loves being back in action visiting her vets!”- Terri Woodworth, Honor’s handler

After months of working together, Hill and Wilson created the final prosthetic for Honor. Honor is back working 2-3 days a week at the veteran hospital. She is slowly but surely getting her used to her new prosthetic. She is also starting ongoing specialized care with a veterinarian who will do chiropractic care, acupuncture, and physical therapy. Rapid Application Group is beyond humbled to have been able to help this furry friend continue to bring joy to others. Honor has a personal donation account set up at Communication Federal Credit Union, 601 North York Muskogee, Ok 74403- Honors Donation Fund. She also has an Amazon wish list called Honor the Facility Dog. Please feel free to send stuff their way! Honor and Terri appreciate any generous donation, no matter the size.

To send a gift please visit: